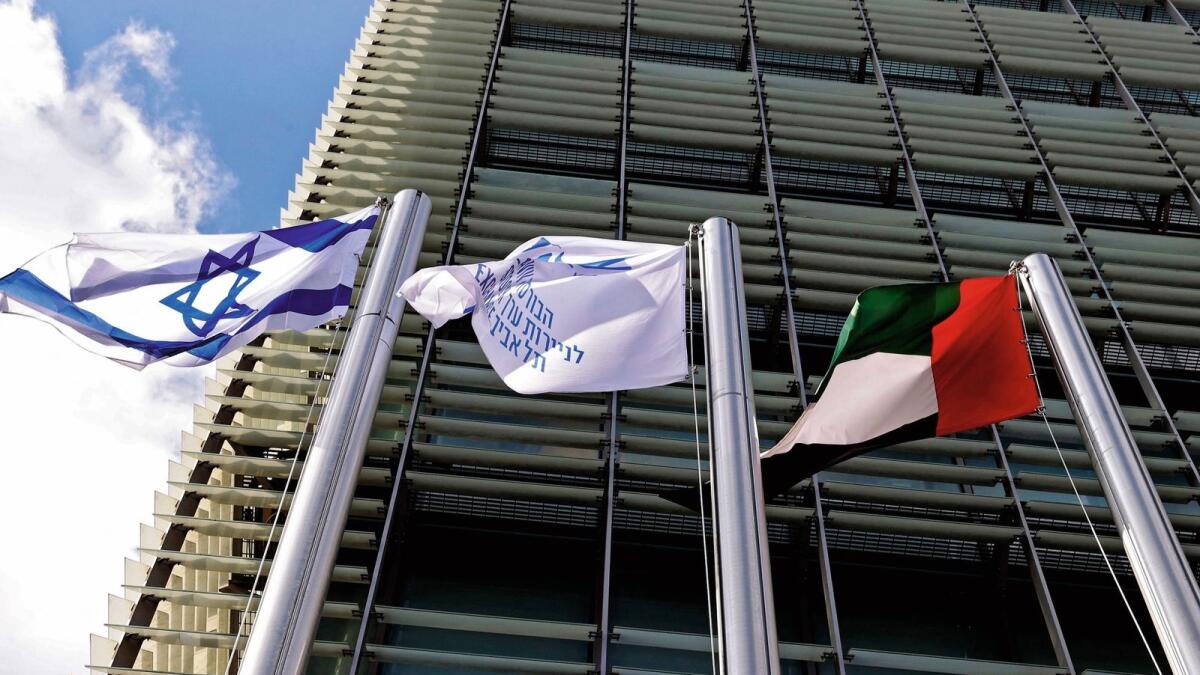 On September 15, 2020, UAE Foreign Minister Sheikh Abdullah bin Zayed Al Nahyan, Bahraini Foreign Minister Abdullatif bin Rashid Al Zayani, then Israeli Prime Minister Benjamin Netanyahu and US President of then, Donald Trump, signed the Abrahamic Accords, changing the course of history in the Middle East. The peace deal signed on the southern lawn of the White House has brought about a tectonic shift in the Muslim world’s relationship with the Jewish state. Morocco and Sudan followed suit and signed similar agreements and established diplomatic relations with Israel. More than just a political breakthrough, the agreement ushered in a new era of prosperous friendships, economic cooperation, investment partnerships, tourism and people-to-people relationships.

The Abrahamic Accords were never an agreement confined to paper. One year later, the signatories and their collaborators are reaping the benefits that continue to grow and expand. With direct flights operating between the two countries, more than 130,000 Israelis visited the United Arab Emirates in the first four and a half months after signing the agreements. There have been several high-level ministerial visits from both sides since the signing of the agreements. The UAE-Israel Business Council established to bring together entrepreneurs, businessmen, government officials and NGOs seeking to advance economic and social opportunities between the two countries currently has over 4,000 registered members. The Emirates now have their first students enrolled in Israeli universities. The Israeli pavilion at Expo 2020 is also emblematic of the ever-growing new bond between the two countries and also Israel’s eagerness to forge new relationships with countries in the region. An open pavilion without walls beckoning to the world with a clear message that the door and the heart of Israel are open. The United Arab Emirates had extended their invitation to Israel even before the agreement was signed, as the world fair organized by Dubai aims to bring the nations of the world together under the theme “Connect Minds, Create the Future”.

The Abraham Accords gained momentum from day one and over the span of a year with full-fledged diplomatic exchanges bringing the fledgling relationship on a new course. In June 2021, Israel opened its embassy in Abu Dhabi. “We are here to stay; we call on all countries in the region to recognize it and come and talk to us,” Israeli Foreign Minister Yair Lapid said. Within a month, the United Arab Emirates became the first state in the Gulf to open an embassy in Tel Aviv. “Seeing the Emirati flag fluttering proudly in Tel Aviv might have seemed like a far-fetched dream about a year ago. In many ways, nothing could be more natural and normal Israeli President Isaac Herzog said. He called the opening of the embassy “an important step in our journey towards the future, peace, prosperity and security” for the Middle East. training, other Gulf states have also taken steps to strengthen diplomatic relations with Israel.

In March 2021, the government of Bahrain appointed Khaled Yaousif Al Jaahma as its first ambassador to Israel. Morocco and Sudan have also announced that they will open embassies in Israel. The accords even helped restore and revive Israel’s relations with Egypt and Jordan – the first two Arab countries to sign a peace accord with the Jewish state. Egypt and Israel signed the Camp David Accords in 1978 and Jordan signed the Wadi Araba Treaty with Israel in 1994. After decades, we have seen high-level country-to-country visits when Prime Minister Naftali Bennett met Egyptian President Abdul Fattah Al Sisi. Jordan is also engaging with Israel as negotiations are underway on new agreements on water and trade relations.

The strong diplomatic relationship between the UAE and Israel has a ripple effect when it comes to jointly tackling regional security and terrorism issues. Politically, the agreements are supposed to advance the Palestinian cause by speeding up the peace process and temporarily halting Israeli annexations to the West Bank. The UAE has repeatedly reaffirmed its strong support for the two-state solution as a permanent solution to the Israeli-Palestinian problem. The Abrahamic Accords can advance the two-state solution by opening up channels of communication between the Arab states and Israel.

The Abrahamic Agreements were founded on strategic, economic and commercial interests shared between the signatories. And unsurprisingly, one of the biggest impacts is the endless economic opportunities the deal has opened up for both the UAE and Israel – two economic powers in the region. The rapprochement of the United Arab Emirates – the region’s trade, tourism and transport hub that boasts world-class infrastructure, and Israel – the start-up country with its cutting-edge technology and innovation – has had beneficial spin-offs for the economies of the region.

As UAE Minister of Economy Abdulla bin Touq Al Mari rightly said: “When the opportunity arises, we will not stop at the door.” In fact, the two countries have left their doors wide open for trade and economic partnerships, as we saw last year. Bilateral non-oil trade between the UAE and Israel has reached more than $ 675 million since the signing of the Abrahamic Accords last year. The two countries have signed a number of cooperation agreements in areas such as artificial intelligence (AI), cybersecurity, food, water security, energy, among others. Six major agreements have been signed between entities of the two countries in the fields of technology, tourism, health, energy, environment and many will be announced soon.

One of the most important is the billion dollar deal from Mubadala Petroleum of Abu Dhabi for a 22% stake in the Tamar offshore gas field of Israeli company Delek Drilling. Representatives of the Israeli air-water company Watergen, Tel Aviv University and the Emirati company Baynunah signed an agreement to establish a joint water research institute in the United Arab Emirates. Haifa-based regenerative medicine company Pluristem Therapeutics has signed a non-binding memorandum of understanding with the Abu Dhabi Stem Cell Center to advance cell therapies for diseases, including Covid-19. It is estimated that 40 Israeli companies have established themselves in the United Arab Emirates. Israel and the United Arab Emirates have also signed a tax treaty to avoid double taxation to boost business development.

After signing more than 60 memoranda of understanding, the minister said the UAE seeks to create more than $ 1 trillion in economic activity with Israel over the next decade. Rand Corporation, a public policy think tank, estimates that if new relationships evolve towards deeper economic integration, around 150,000 new jobs will be created for the United Arab Emirates, Bahrain, Sudan and Morocco.

At an event marking the first anniversary of the Abrahamic Accords, US Secretary of State Antony Blinken said he sees new economic opportunities, innovations and collaborations. “The UAE has made significant investments in strategic sectors in Israel, including energy, medicine, technology and healthcare. Private companies in your countries are working together on everything from desalination to stem cell therapy. These opportunities would be exciting at any time – but they are especially important today, as we strive to rebuild better after the devastating economic impact of the pandemic, ”he said.

Growing economic ties and deepening friendship have proven to be a win-win for both countries, especially after the economic crisis caused by the Covid-19 pandemic. In the first year of the Abrahamic Accords, we enjoy the fruits of peace. As long as the leaders of the two countries pursue a common vision of peace and development, the historic agreement will undoubtedly transform the Middle East into a more peaceful, stable and prosperous region.

As UAE Foreign Minister Sheikh Abdullah bin Zayed and Israeli Yair Lapid said in a joint forum in September 2021, Abraham’s accords have proven to be extraordinarily durable, even with the pandemic of Covid-19. “After a year of open and peaceful relations between the UAE and Israel, real change is taking place. Our goal now is to do more – to deepen the peace and extend it to the whole region. “

“Belize truly is the land of opportunity… now is the best time to invest,” Minister Kevin Bernard said at the Florida International Trade Culture Expo