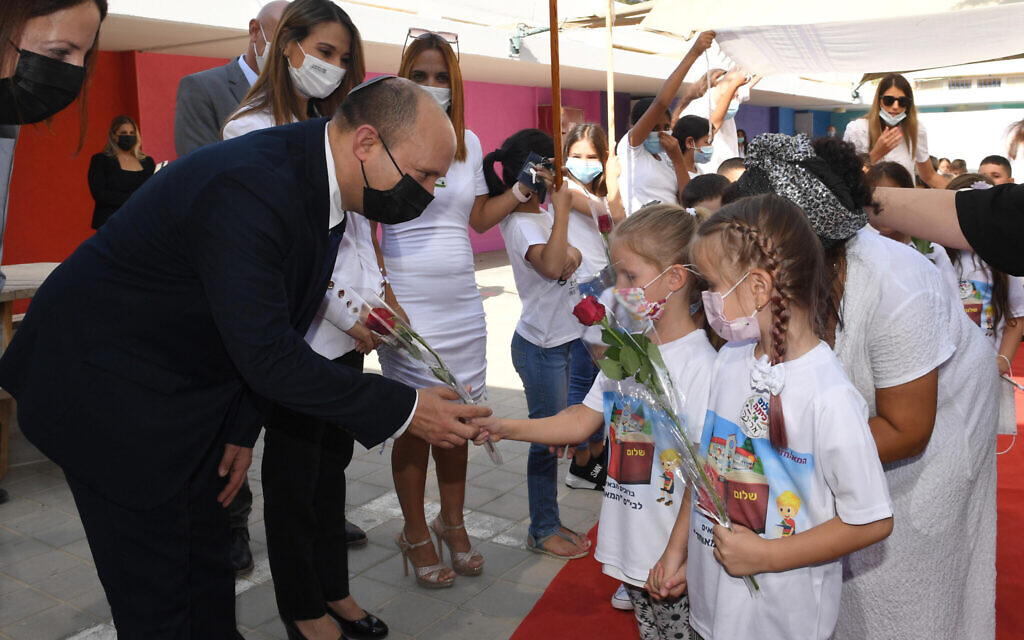 Amid COVID and other challenges, hoping for a year of energy, humility, health

In the deadly shadow of COVID-19, Israel sent its children back to school on Wednesday morning.

Contagion levels of the virus have reached an all time high, with more than 11,000 new cases recorded on Monday, and close statistical analysis showing Israel is an unenviable world leader in the number of daily new cases per capita in recent times. Death rates have also accelerated, with more than 550 deaths in August – up from, for example, seven in June. Less than 2.2 million Israelis have had their third booster shot, without which our antibodies fall out. And 18,000 teachers, along with about the same number of assistants and other education personnel, have not been vaccinated at all, our Education Minister, Dr Yifat Shasha- revealed Tuesday evening. Biton.

Yet the Director General of the Department of Health, Professor Nachman Ash, denies that it is irresponsible to start the new school year with classroom learning. “I don’t think it’s a bet,” Ash said in a TV interview, even as he predicted a temporary spike in the new cases. “I think we are making an informed decision.”

And the point is that the bigger picture, as it has so often been the case during this pernicious pandemic, can rightfully be viewed with at least a little less alarm and pessimism than the statistics above suggest.

For starters, Israel is currently a world leader in the number of new daily cases, in large part because it has performed an unprecedented number of COVID tests before returning to school. Meanwhile, the number of severe cases, at 666 on Thursday morning, is more than double what it was a month ago – but the rise appears to be slowing as the third shot goes off, vulnerable Israelis having rushed to receive the reminder.

In the face of the current challenges of COVID and its variants, by maintaining at least a partially functioning economy and keeping the public sane and cooperative, our new government’s strategy is to make us live, study and work better than we can. can. Time will definitely tell if his approach and the process by which he makes and implements his decisions are more effective than those of his predecessor.

Amid not insignificant initial chaos, he managed to set up mass testing procedures for students and chose to move forward with a return to classrooms this week – even though September is so rich in Jewish festivals that there are hardly any school days anyway this month – because after pooling the expertise of professionals in health, education and others, he concluded that it was the less bad option. One of the main factors was that our children suffered for so long in Zoom classrooms, kept apart from their peers.

Coming to class in Yeroham on Wednesday morning, Prime Minister Naftali Bennett offered a rare and needed quality in his remarks to children and television cameras: humility. He promised his government would do its best to keep the country open and our children in school, and kept going. “We can’t predict the outcome, because there are things that are bigger than us, but we can promise maximum effort.”

We are about to enter a new Jewish year, in an overheated world; a world recalibrating in the wake of America’s bloody withdrawal from Afghanistan and the emboldening of extremist Islamic terrorism 20 years after September 11; a world struck by a pandemic. Obviously, the coming year will not be quiet. To meet its challenges, a promise of maximum effort to the younger generation from the first day of school, combined with a minimum of humility, seems to be a good place to start.

I wish Shanah Tovah to everyone in the Times of Israel community, to all of our readers, and indeed to all good people everywhere – a year (thank you Prime Minister) of maximum effort and humility, a year of accomplishment, a year of good health.

** An earlier version of this editor’s note was sent on Wednesday in ToI’s weekly update email to members of the Times of Israel community. To receive these Editor’s Notes as soon as they are released, join the ToI community here.

The climate crisis and responsible journalism

As an environmental reporter for The Times of Israel, I try to convey the facts and science behind climate change and environmental degradation, explain – and criticize – official policies affecting our future, and describe the Israeli technologies that can be part of the solution.

I am passionate about the natural world and disheartened by the dismal lack of awareness of environmental issues of most of the public and politicians in Israel.

I am proud to do my part to keep The Times of Israel readers properly informed on this vital topic – which can and must lead to policy change.

Your support, by joining The Times of Israel community, allows us to continue our important work. Would you like to join our community today?

Join the Times of Israel community Join our community Already a member? Log in to no longer see this

How to Handle Religious Objections to a Workplace Vaccination Mandate

Where can I get a payday loan?