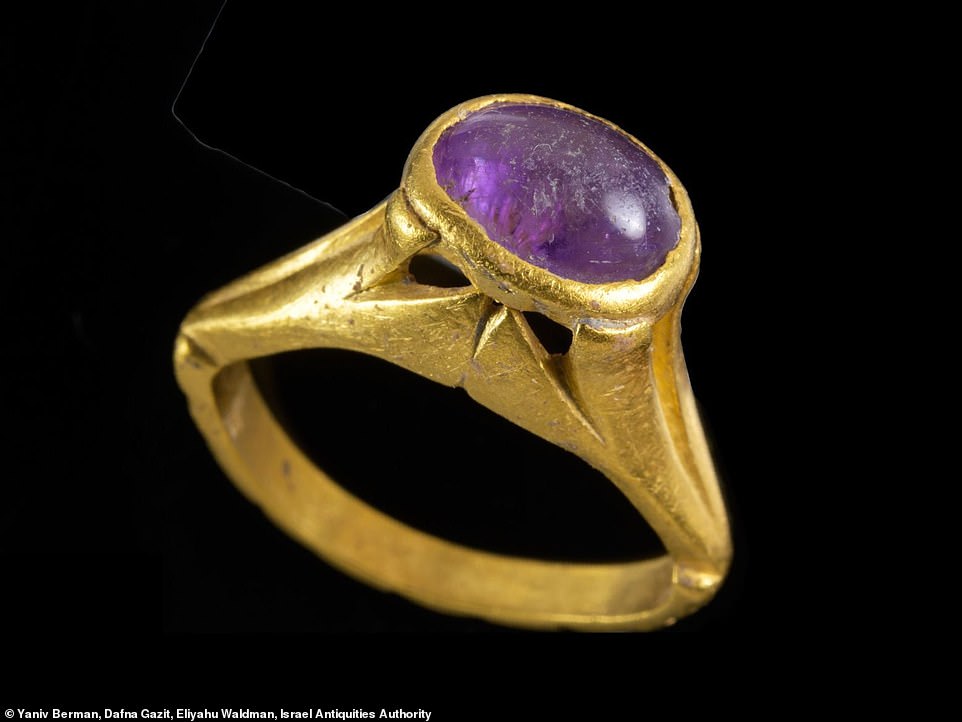 An ancient gold ring set with amethyst, believed to be worn in an attempt to stop hangovers, has been found in the world’s largest ancient wine factory.

The â€œspectacularâ€ ring was discovered during excavations carried out by the Israel Antiquities Authority in the city of Yavne in central Israel.

This is the location of the 75,000-square-foot Byzantine wine factory, revealed earlier this year, which produced up to two million liters of wine per year at its peak.

With its center stone in a brilliant purple color, the ring may have been worn by a person of high rank to indicate wealth, possibly around the 7th century AD.

It is also possible that the last bearer was a wine taster who believed that the purple stone would ward off the effects of alcohol – a myth widely shared in the ancient world.

Scroll down for video

The gold ring is set with amethyst – widely believed in the ancient world to stop the effects of alcohol, although this is denied by modern science

AMETHYST: A “CURE” OF THE CHARANT WAR

Amethyst is a crystalline quartz that comes in colors ranging from pale lilac to deep reddish purple.

The popular gemstone’s name means “not drunk” in Greek, and it was widely accepted in the ancient world to stop the effects of alcohol – although this is denied by modern science.

University College London said: “Since glass is nothing but non-crystalline quartz, an amethyst glass will no more stop a hangover than a bottle of wine.”

Either way, amethyst stones are sold on Amazon today as a quack “crystal therapy” to cure hangovers.

The Israel Antiquities Authority (IAA) shared the find on its Facebook page.

â€œAmethyst is mentioned in the Bible as one of the 12 types of stones on the high priest’s breastplate,â€ he says.

“There are many virtues associated with this gem, including preventing hangovers, which is ironic as the ring was discovered near the Byzantine wine factory.”

Amethyst is a crystalline quartz that comes in colors ranging from pale lilac to deep reddish purple. It is classified as a semi-precious stone and is generally relatively affordable today.

It was one of the 12 stones mounted in the ceremonial breastplate of the High Priest, as mentioned in the Book of Exodus in the Bible.

Dr Amir Golani, an antique jewelry expert at the IAA, speculates that the ring must have belonged to a wealthy person and that wearing it indicated his high status and wealth.

“Such rings could be worn by both men and women,” Dr Golani told The Times of Israel.

Excavation directors on behalf of the Israel Antiquities Authority are reluctant to date the ring precisely.

However, it has been found in layers dated from the late Byzantine period to the early Islamic period (7th century AD), suggesting that it is around 1,400 years old.

It is possible that such a ring has been passed down from generation to generation for centuries, says the IAA.

â€œIn fact, amethyst gold rings were common in the Roman world; therefore, the ring may even have been passed down from a wealthy person who lived in Yavneh as early as the 3rd century AD, â€he added.

Experts believe the ring (pictured) was worn by a person of high rank to indicate wealth, possibly around the 7th century AD

The old wine production complex covered an area of â€‹â€‹75,000 square feet, with individual presses each of 2,400 square feet

It is believed that the Greeks started the trend of keeping amethyst close to them to alleviate the effects of a hangover – something which is of course belied by modern science.

The name of the popular gemstone means “not drunk” in Greek, and it was widely accepted in the ancient world to stop the effects of alcohol. This belief may have spread to the Byzantines.

“Did the person wearing the ring want to avoid intoxication by drinking a lot of wine?” Dr Elie Haddad, director of excavations for the IAA, said speaking to The Times of Israel. â€œWe’ll probably never know. “

The Byzantine Empire (395-1204 and 1261-1453), also known as the Eastern Roman Empire, was a powerful civilization based in Constantinople (now Istanbul).

The ring was discovered in the vast Byzantine historical network that once made up the ancient Israeli wine factory.

The site, located in the central area of â€‹â€‹Israel, would have been an area large enough to be on a map alongside Jerusalem

Archaeologists spent two years excavating the 75,000 square foot site, as part of a project to expand the town of Yavne to the surrounding area.

They found five massive presses, warehouses for aging and marketing the wine, and even ovens for baking the clay vessels used to store wine.

The well-organized and structured factory produced the regional wine known as Gaza, or Ashkelon, which was then exported throughout the Mediterranean.

Israeli employees of the Israel Antiquities Authority (IAA) work at the site of the 1,500-year-old industrial estate wine factory, discovered during archaeological excavations in Yavne

A general view of the site. They found five massive presses, warehouses for aging and marketing the wine, and even ovens for baking the clay vessels used to store wine.

â€œWe were surprised to find a sophisticated factory here, which was used to produce wine in commercial quantities,â€ the excavation directors said in a statement.

â€œA calculation of the production capacity of these presses shows that around two million liters of wine are marketed each year, while we must not forget that the entire process was carried out manually.

By comparison, the UK as a whole now produces just under eight million liters per year.

YAVNE: ONCE THE LARGEST CELLAR IN THE WORLD

Yavne is a city in the central district of Israel, and in English translations of the Bible is known as Jabneh.

It has a long history. It was founded in 2000 BCE as a Canaanite city.

It lies about four miles east of the Mediterranean and a new study reveals that it was a major industrial complex.

He produced the wine known as Gaza 1,500 years ago, which was shipped all over the Mediterranean.

However, its winemaking dates back further than that, to 200 BCE, where there was a small vineyard and wine press.

After the destruction of Jerusalem in 70 CE and the loss of the Second Temple, Yavne is said to have become the center of the religious identity of the Jewish people.

The current population is approximately 47,000 inhabitants.

White Sox vs Twins vs Guardians: How will the AL Central run in the second half go?