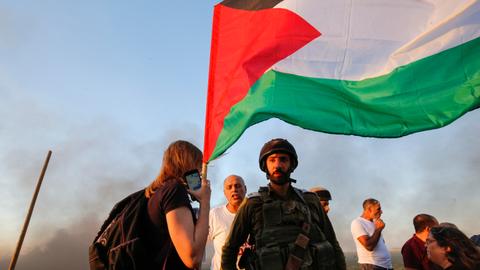 While the past few months have seen a significant increase in global support for Palestinian liberation in response to Israel’s attempts to forcibly dispossess Palestinians of their homes, the absence of an allegedly important actor has been notable.

Said actor, the Palestinian Authority (PA), has instead focused its energies on the violent repression of Palestinian protests, especially those that arose in response to the PA’s alleged assassination of activist Nizar Banat.

While the Palestinian Authority’s involvement in suppressing Palestinian popular protest may come as a surprise to some, it makes perfect sense to those familiar with the failure of the state-building project that the Authority has sought to pursue in the decades since its creation.

Among the cornerstones of the Palestinian Authority’s state-building project is a commitment to neoliberal economic principles, solidified by President Mahmoud Abbas’ appointment of former World Bank economist Salam Fayyad as Prime Minister in 2007.

In accordance with these principles, the Palestinian Authority is committed to creating institutions that facilitate the accumulation of capital both within the territories it governs as well as outside them, even – perhaps, above all – to the detriment of the will of Palestinian civil society and the grassroots activists and communities.

Fayyad may have resigned as prime minister in 2013, but the Palestinian Authority has continued to focus on neoliberal state building.

The most charitable reading of such an approach to governance in Palestine suggests that the PA’s intentions are to demonstrate that the Palestinians can govern themselves within the confines of the world’s most hegemonic economic logic.

This approach and prioritization, however, requires subduing the political will, the right to self-determination and the economic agency of the Palestinians because of the inherent paternalism it implies, especially when implemented by the Palestinian people. a leadership whose own popular legitimacy remains deeply suspect.

It also continues a tradition of relying on ideas of economic rationalism as a pretext and vocabulary to dehumanize Palestinians, delegitimize their anti-colonial resistance, and advocate for the colonization of their land.

The Zionist colonization and colonization of Palestine relied heavily on the perpetuation of myths that erased the presence of Palestinians from their historic homeland.

Even among academics and propagandists who acknowledged the Palestinian presence, accounts of economic backwardness downplayed its importance and even served as a pretext for colonization.

Nahla Zu’bi describes two main trends within Israeli scholarship on the economy of Palestine under the British Mandate. The first trend, represented by historian Smiha Flapan, argued in favor of the existence of “two distinct” national economies “: a” Jewish capitalist economy “, which was able to develop rapidly, and a” traditional and backward Palestinian economy. ”, Which could not do so, due to competition and“ a crisis of modernization of the Arab sector ”.

The second trend, represented by veteran of the Israeli intelligence community Yuval Arnon Ohana, downplays the importance of the economic agency of the majority of Palestinians, suggesting instead that the acts of protest during the mandate were instigated by the political elites. and Palestinian economics who feared the potential impact of Jewish and capital immigration on “their existing status and their means of political and economic control.”

According to Zu’bi, this was because Ohana believed that “British colonialism in Palestine was a force for progress” and that Jewish capital “offered the unemployed fellahs wide employment opportunities” – ignoring the fact that the fellahs (Palestinian agricultural workers) were forced into unemployment primarily because of the expropriation of the land on which they lived.

In addition to the racism inherent in such arguments, the whole premise of the Palestinian economy existing as entirely pre-capitalist during the British Mandate era is false; Palestine had already been an important part of the world capitalist system in the 19th century.

As the PA and other facilitators of Israeli settlement colonialism continue to do today, these accounts use racist economic arguments as a method of distracting from the ideologically motivated dispossession and destruction that Palestinians have faced. and continue to face.

Today, ideas of economic backwardness and powerlessness remain ubiquitous in the “development” narratives of those living under the supposed Palestinian Authority regime.

The presence of NGOs, for example, accountable to their mostly foreign donors, depoliticizes the plight of the Palestinian people, rendering them the victim of an objective circumstance rather than a people oppressed by politically and ideologically fabricated conditions.

The NGO sector has also grown in line with the Palestinian Authority’s growing commitment to neoliberalism. Fundraising cycles peddled by actors allergic to directly attacking political realities and the action of the oppressed reinforce racist ideas about pathological victimization and development, not so different from the colonial dehumanization that guided the missions. civilizational in the past.

Outside of the NGO realm, the PA also tried to promote a developmental agenda that sought to compromise resistance in exchange for funding.

An early example of this during Fayyad’s reign was the 2007 Palestine Reform and Development Plan (PRDP). According to Sami Tayeb, this plan and others were presented to donors with the aim of gaining the support of a Palestinian state “but only if the Palestinians could first achieve good governance, economic growth and security. “.

U.S.-sponsored proposals, such as Donald Trump’s 2020 peace plan, have built on this approach, attempting to further and permanently dispossess Palestinians of their land by offering a series of economic incentives that do not would only anchor the neoliberal state-building attempt more deeply. project.

By drafting proposals like the PRDP, the Palestinian Authority has strengthened its role as a sub-contractor to Israel’s colonial occupation. It seeks to prevent popular protests and resistance, which are not only seen as indicators of poor governance and poor security, but also as an obstacle to attracting the kind of large-scale investments required to execute development projects. which serve as a smoke screen for the deprivation of the right to vote. of the majority of Palestinians.

Returning to the violence with which the PA has faced Palestinian popular protests this year, it is clearer than ever that the PA’s undemocratic insistence on building an integrated neoliberal economy as a path to building state makes it so deeply disconnected from the demands of the people they claim to represent.

So much so that at a time of unprecedented support and visibility for the Palestinian cause, they can only be counted among the institutions that enact violence against the Palestinian people – allegedly in the name of good governance and economic rationalism that only the PA and other Palestinians elites understand.

The neoliberal and developmentalist logics that currently dominate the politics of Israel, the United States, world and regional powers, and the Palestinian Authority itself indicate that little has changed and that the normative ideas of economic rationalism continue to hold sway. ‘be used as a pretext for the perpetual colonial violence adopted. on the Palestinians.

Disclaimer: The views expressed by the authors do not necessarily reflect the opinions, views and editorial policies of TRT World.