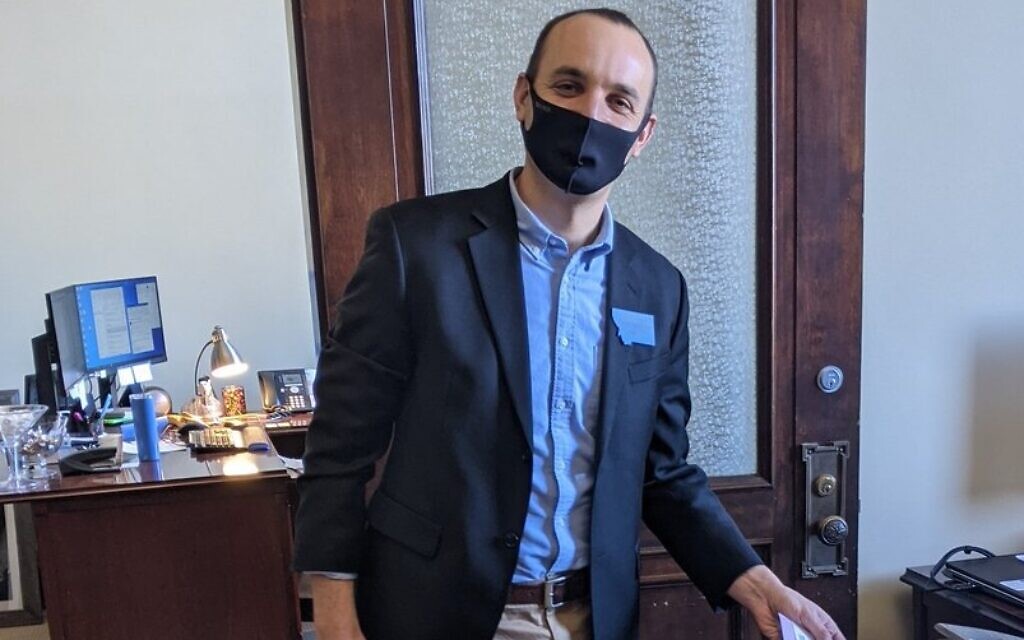 JTA – As Danny Tenenbaum prepares to open debates in the Montana Legislature on March 29, he said to himself: better keep it short. So he sang the Shema prayer.

He had other ideas for the invocation, he told the Jewish Telegraphic Agency, but he “stuck to what I know best.” The Shema is the Jewish prayer invoking the unity of God.

“I wanted to do the hatzi kahddish, but my Aramaic needs work, â€he said, referring to the prayer exalting the name of God which is used as a transition between parts of a service.

It was a bold move by Tenenbaum, 35, a Jew and Socialist Democrat in a state where both identifications are rare. Tenenbaum, elected in 2020 to a two-year term in the lower house, says his status as a small minority motivates him to educate and work with people of all faiths and political backgrounds.

â€œMy philosophy is not to hide who I am and to be proud of who I am,â€ he said. â€œAnd often that means being the first Jewish person someone meets here. And for me, it’s pretty exciting to have this opportunity to kind of be an ambassador for my religion or ethnicity, whatever you want to call it.

Tenenbaum volunteered to give the invocation, he said, because he saw how important it was for fellow lawmakers to say Christian – and sometimes Native American – prayers.

â€œI’m not the most religious person on the surface, but I thought it would be fun to volunteer and sing an important prayer,â€ he said.

Montana’s legislature is made up of roughly two-thirds Republicans and one-third Democrats, which Tenenbaum called “frustrating.”

â€œTo get things done, you have to speak with Republicans,â€ he said.

Surprisingly, he finds his affiliation with the Democratic Socialists of America, or DSA, to be a plus in these talks.

Danny Tenenbaum (center) campaigning in Missoula for the Montana House of Representatives, October 6, 2019 (Twitter / via JTA)

“It kind of made it easier for me to work with the Republicans, because for them they saw that I was not just someone who is a ‘team player for the Democratic Party’, but someone one who thinks independently on every problem and isn’t that much of a partisan thinker, â€he said.

One area where he has had success is housing, which has become his favorite issue. Republicans were opposed to subsidies for affordable housing, but he was able to garner bipartisan support on other aspects of the issue, such as tackling zoning ordinances that prevent new housing from entering the market.

â€œThe younger ones in the legislature, both Democrats and Republicans, saw the issue the same way,â€ he said. “We needed to increase supply and we needed to increase construction because it’s a problem that’s now being felt across the state with a housing shortage.”

He has had similar successes in building coalitions to strengthen protections for people with dementia and in tackling the foster care system and children who are taken from their parents.

When it came to debating access to abortion, Tenenbaum found himself explaining Judaism’s approach to the issue, which values â€‹â€‹the mother’s life above all else and is much less strict than the conservative Christian denominations.

“People were quoting Christian scriptures, and that inevitably led people to ask me what the Jewish point of view is on abortion, which is not what I think people expect,” he said. he declared. â€œIt’s complex, but a lot of evangelical Christians like to see themselves, or to see their religion as an extension of Judaism, and they use terms like Judeo-Christian, and so they kind of assumed that the Jewish faith considers the abortion in the same way that the Christian faith does. And that’s just not the case. 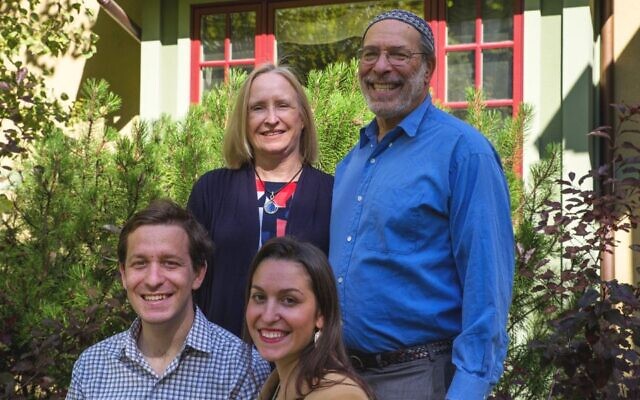 Rabbi Ed Stafman poses with his family in an undated campaign photo in Bozeman, MT in 2020 (Ed Stafman Campaign / via JTA)

A Jewish Democratic colleague in the legislature, Rabbi Ed Stafman, also found himself explaining Jewish theology of abortion to his fellow Republicans.

“The result was not good,” Tenenbaum said: Democrats lost the debate and the the legislature has passed laws restricting access to abortion. “But even though I don’t agree with them on this specific issue, the conversation and discussion I have had with people who support these bills, in the legislature but also in the halls, has been a revealing experience for me. “

After Republicans introduced a bill this session that would divest from entities that boycott Israel – legislation popular with many pro-Israel groups – Tenenbaum also found himself explaining to fellow Republicans why he supported the movement. boycott, divestment and sanctions. He recalled his studies at the Hebrew school in suburban Maryland and said he found BDS “peaceful”.

He said that conversations with Palestinians during his tour of the Middle East and then to law school “definitely opened my eyes to their experience, their history and how they approach this issue, which for them, is an existential question. It is literally about their existence. 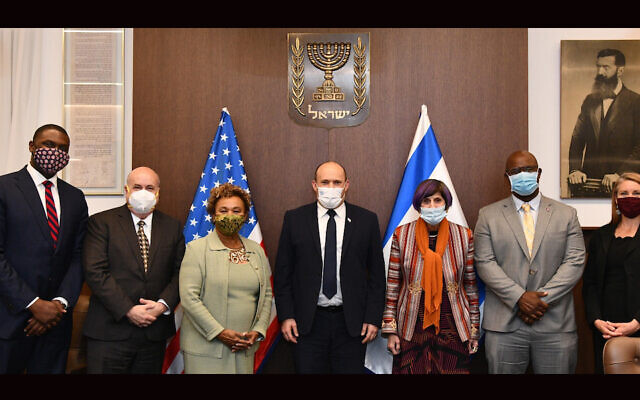 Tenenbaum was shocked to learn that the DSA – which supports the BDS movement – has considered deporting member Jamaal Bowman, D-NY, for visiting Israel and the West Bank with J Street, a liberal political group in the Middle East which defines itself as pro-Israel.

â€œI wouldn’t support that at all,â€ Tenenbaum said of the proposed eviction, in part because of his own experiences touring the area. Tenenbaum was excited when J Street was formed in 2008 and joined.

Tenenbaum grew up in the Maryland suburb of Washington, DC, and attended the University of Wisconsin. He traveled across the Middle East as a refugee officer for the Department of Homeland Security and attended New York University Law School.

As he neared graduation and considered starting a family with his wife Bracha, they decided they didn’t want to stay in New York City. Tenenbaum thought back to his college days and a summer trip on a cross-country bike.

â€œI stopped in Missoula, and it was a beautiful summer day. I think it was July 4th. And it was amazing. It was wonderful and I kept that in mind, â€he said.

He also knew he wanted to be a public defender – in a place “where you didn’t have to wear a tie,” in his words.

â€œMissoula was that place,â€ he said.

Today, he is the stay-at-home father of two young children, who have fortunately become natives. In October, he posted a photo of himself and his three-year-old son wearing matching plaid shirts attending a football game at the University of Montana.

Tester: Paid out of pocket. Awareness of real vacation. Hebrew! ????

Daines: Campaign 5 years before the elections. Too many fonts. ????

Rosendale: Generic campaign ad. Name himself but not his spouse. ???? pic.twitter.com/F6dvo7Lffz

Nor does he shy away from being Jewish in a state where the community has perhaps 1,500 people. In a tweet in September, Tenenbaum noted the various Rosh Hashanah greetings by federal lawmakers in the state published in a Chabad calendar.

Democratic Senator Jon Tester got the highest score: â€œReal Vacation Awareness. Hebrew! â€(The tester includedâ€œ L’Shana Tova! â€In his greeting.) Republican Senator Steve Daines lost points forâ€œ too many fonts â€and Matt Rosendale, the Republican who is the only lawmaker in the Montana in the US House of Representatives scored worse.

â€œNames himself but not his spouse,â€ Tenenbaum wrote, followed by a vomit emoji.

In August, after lawmaker says Jews fell victim to “critical race theory” during the Holocaust, Tenenbaum offered Republicans “free ‘sensitivity training’ on Judaism, the Holocaust, and other topics.

It is imbued with the Jewish history of the state and its role in its continuum; in January, shortly after his election, he visited the Jewish cemetery in Helena, the state capital, to “hang out with my people,” as he put it on Twitter. He posted photos of the graves of prominent Montana Jews.

Tenenbaum now celebrates life events and Shabbat nights with a small coterie of Jewish friends in Missoula. He said it felt more natural than the Hebrew school he attended.

â€œWe have like five families with whom we are very close. And it’s kind of our congregation, â€he said. â€œI know it’s seen as a kind of withdrawal and observance of a formal synagogue. I feel more Jewish now and I feel more religious and more practicing now than I did growing up. “